Trailing Stop is a Stop Loss order that follows the price.
Using a trailing stop you minimize losses without having to limit your profits. When placing this type of order, you need to specify the price distance in the currency of the instrument. If the market moves in the direction you want, the stop order follows along and triggers only after the specified distance is passed against the desired movement.

For example, you may place a Trailing Stop order to buy with the price distance of 10 at the time when the share price was at $50 – Buy Trailing Stop 60. The market moves down by 2. Your order will follow it and will be automatically replaced at the new lower market price at the same price distance, that is, as the Buy Trailing Stop 58. Let’s say after that the price was increased by 4, meaning the market goes in a direction unfavorable to you. The bid will remain at the same level and the distance will be reduced to 6.
If the price continues to rise, and grows by 6 or more, the trailing stop triggers. If the price falls by less than 4, the order remains where it is. If the price falls even lower, the sliding stop will move to keep the distance of 10.

Depending on the instrument type the current price is:

- bid price for all other instruments with Buy direction

- ask price for all other instruments with Sell direction

Setting up trailing stop in the terminal.

To activate trailing stop open the Edit deal window from the chart or Positions tab. Tick the box Trailing stop and set value. 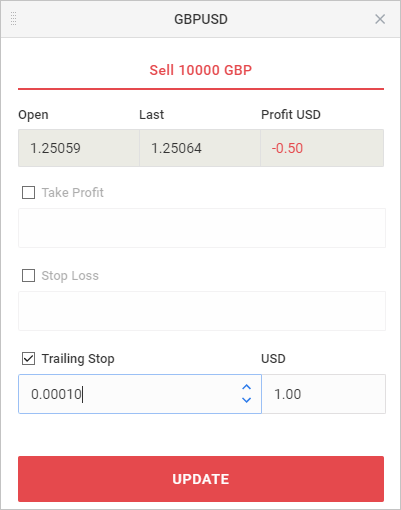